A play-based approach is characterized by learning through exploration, discovery, and trial-and-error. 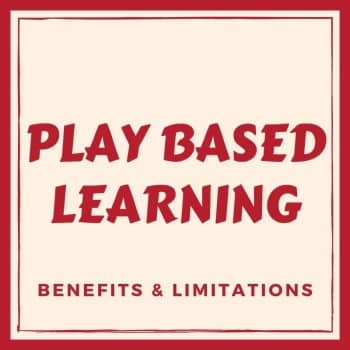 Benefits of Play Based Learning include:

Contents show
Full List of Benefits and Challenges
Why is Play Good for Learning?
The “Play is Fun” Argument
History of Play in Early Childhood Education
Acceptable Ages for ‘Playing to Learn’
Final Thoughts
References

Why is Play Good for Learning?

Playful approaches to learning are underpinned by the constructivist learning theory. From a constructivist perspective, children learn not through being told facts, but discovering them through engagement with their worlds.

Constructivists believe learning occurs best when children learn by discovering and creating knowledge themselves through engagement with their environment.

In order to create constructivist learning environments, educators need to encourage children to actively engage with toys, everyday materials and one another. Through these resource-rich, contextualized lessons, children are given every opportunity to construct knowledge during their experiences.

The “Play is Fun” Argument

Many educators argue that play is the best learning approach because it’s fun.

While play is fun, it’s much more than that. It is serious work. We’re not employed as teachers just to have fun!

Primarily, play is encouraged because of its developmental and cognitive benefits.

However, fun does have a role to play in learning.

Benefits of having fun while learning include:

Fredrich Frobel (1890s) was the first educator to formally highlight the educational benefits of play. Froebel designed a series of educational toys titled ‘Froebel’s gifts’. He believed playing with these toys would help with children’s cognitive development.

Each of Froebel’s toys introduces a new cognitive challenge for children which builds on the last and requires the exercise of new cognitive strategies.

Montessori would create resource rich environments for children to play in. She would observe the children’s play and change the environments in order to ensure materials were provided that would stimulate learning at the appropriate developmental level.

The Steiner-Waldorf approach (1920s) advocates for play in education. The teacher is a very interventionist member of play in a Steiner approach. She provides significant structure in the play environment and leads children’s games. Steiner considered the teacher to be the ‘chief storyteller’ in the classroom.

The Reggio Emilia approach (1950s-1970s) founded by Loris Malaguzzi similarly argued for the value of play. However, the Reggio Emilia approach believed the teacher should play with the child in a co-learning environment. Teachers would sit alongside children and facilitate play by asking open-ended questions and prompting children to pursue new approaches in their play.

The Forest Schools approach (1990s-Now) emerged in Scandinavia and spread throughout the world in the 1990s and 2000s. Forest schools encourage outdoor play and is characterized by a high tolerance for risk taking so children would challenge themselves and develop self-reliance in unstructured outdoor environments.

Acceptable Ages for ‘Playing to Learn’

While learning through play is almost universally celebrated as the “highest form of learning” for young children, it tends to become less common as children grow older.

Before age 5, play is almost the exclusive form of learning for children.

Between ages 5 and 10, children are increasingly expected to move to a more formal academic learning environment.

The decline of play in education for older children can be attributed to societal expectations from parents, educators and school administrators.

However, the benefits of play for learning are not exclusively experienced by young children, which may justify the use of play for teaching adolescents and even in adult learning.

There are many benefits of play-based learning for children, but also some challenges.

Educators and parents need to know exactly why play is good for learning, and that it’s more than ‘having fun’.

To learn more about play in early childhood, read my full outline of the 17 different types of play that help children learn.

Learn More about Types of Play Based Learning: