In 1929, Mildred Parten published her thesis in which she outlined the 6 stages of play.

These are play stages that children pass through in their first 5 years of age. Children go through each stage in a linear developmental pattern.

Parten’s 6 stages of play are:

Read Also: The 17 Types of Play Based Learning

Explanation of the 6 Stages of Play

Unoccupied play can be observed from the earliest months in life. It is defined as sensory activities that lack focus or narrative.

Examples of unoccupied play include:

These forms of play may seem un-educational at first, but have an important developmental purpose.

In the first few months of life children’s unoccupied play helps them orient themselves in the world. They learn to master their limbs and motor skills. They develop depth perception, tactile skills, and object permanence.

Solitary play follows on from unoccupied play. It is play that involves a child playing alone and with little interest in toys outside of their immediate vicinity.

It is more focused and sustained than unoccupied play.

During this stage, children will still have little interest in adults or other children during their play.

Examples of solitary play include:

Even after a child has gotten older and mastered more advanced forms of play, solitary play continues to be employed. Even in adulthood, we play alone to recharge, reflect and explore new ideas on our own.

Onlooker play is the first sign of children showing interest in the play behaviors of other children.

Examples of onlooker play include:

Listening and observing are powerful forms of learning. Albert Bandura, for example, showed the power of observation through his bobo doll experiments. In these experiments, children would observe adults playing with dolls. Children who saw children being aggressive toward the dolls were subsequently more aggressive themselves when they played with the dolls.

Parallel play follows onlooker play. It involves children playing in proximity to one another but not together. They will tend to share resources and observe one another from a distance. However, they will not share the same game play or goals while playing.

Examples of parallel play include:

Associative play emerges when children begin acknowledging one another and working side-by-side, but not necessarily together.

Associative play differs from parallel play because children begin to share, acknowledge, copy and work with one another.

However, it is not quite the next stage (cooperative play) because children do not yet share common goals during play – in other words, they’re not yet playing ‘together’ in any cohesive way.

Examples of associative play include:

During this stage, expect to see children playing together and sharing the same game. The children will have the same goals, assign one another roles in the game, and collaborate to achieve their set game play goals.

This stage represents the achievement of socialization, but social skills will still be developing. Children may need support, guided practice and scaffolding to help them develop positive social skills such as sharing, compromise and turn taking.

Examples of cooperative play include:

Cooperative play is underpinned by the social constructivist learning theory. Key theorists from this approach include Barbara Rogoff and Lev Vygotsky. The central idea in this theory is that social interaction helps students to progress in their thinking. When students discuss things in groups, they get to see ideas from different perspectives and have their own ideas challenged and refined.

Strengths and Criticisms of Parten’s Theory

Read Also: The Pros and Cons of Play Based Learning

Who was Mildred Parten?

Mildred Parten was born in 1902 in Minneapolis. She completed her doctoral dissertation on children’s play in the University of Minnesota in 1929. Within the dissertation, she proposed all 6 stages of play based on her observations of children. Her dissertation was titled: An Analysis of Social Participation, Leadership, and other Factors in Preschool Play Groups.

Her stages of play were again published in 1932 in the Journal of Abnormal and Social Psychology. The article was titled: Social Participation among Preschool Children.

Parten subsequently did her post-doctorate at the London School of Economics then headed to the Yale Institute of Human Relations (1930 – 1936). Later, she moved on to a role as director of statistics for a consumer purchases study for the Bureau of Labor Statistics (1936 – 1939). She spent the final years of her illustrious career at the University as Rochester as a survey consultant and research associate (1949-1956). She died in 1970 from a heart condition. 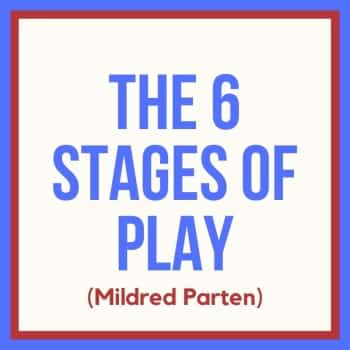 The six stages of play, while mastered in a linear fashion (one after the other), can be returned to once mastered. In other words, even though a child has mastered cooperative play, you may still observe them engaging in parallel play.

While this play taxonomy can be useful for educators and parents, remember that different children have different play preferences. In other words, use it to learn about different forms of play rather than to see whether or not your child is ‘normal’.

All references are in APA style.