Cooperative play is a play-based learning approach that is widely used by early childhood educators to help children develop cognitive, social, emotional and physical skills in an active learning environment. It is often seen as the opposite of solitary play.

The 5 key features of cooperative play are:

Cooperative play is the sixth and final form of play outlined in Parten’s six stages of play, emerging shortly after the ‘parallel play’ and ‘associative play’ stages of play. Parten argues it can be observed in early childhood from around 4  ½ years of age and up.

Cooperative play involves children playing together on a shared game. It is the only type of play in Parten’s 6 stages of play where children share common goals and objectives during play (as directly opposed to parallel play and associative play). Children can be observed sharing resources, assigning roles, sharing ideas, and coming together to agree upon the rules of the play scenario. During this stage of play children learn significant social skills.

Social interaction involves engaging other children in conversation in order to succeed in a game.

The defining features of social interaction during cooperative play include:

Social constructivists such as Lev Vygotsky and Jerome Brunner believe group work is incredibly important for learning and child development.

It helps children because:

Another key feature during cooperative play is the focus on a common goal. Children do not share their play goals in any other stage of play in Parten’s theory.

Shared goals (or ‘a common goal’) may require:

To have a common goal, students need to work together and demonstrate group work skills such as negotiation, collaboration and positive communication. Here, it’s evident that cooperative play helps children to work on their emotional intelligence and develop skills required for 21st Century education.

Language is incredibly important during the cooperative play. Expect to see children:

Self-regulation involves the ability to cooperate and compromise.

In the stages of play leading up to the cooperative play stage (such as the solitary play, onlooker play, and unoccupied play stages), children tend to work on their own tasks, meaning compromise is not as necessary.

When children are required to work on a common play task with other children, they need to self-regulate. They cannot do whatever they want. Sometimes they will have to:

Self-regulation is a skill that we all struggle with, even into adulthood!

This skill will be required throughout a child’s schooling. Whenever they work on group tasks they’ll need to practice cooperation and compromise.

The co-agreement of rules involves children getting together to agree upon how a game should be played. They will agree on what is allowed and not allowed in the game, what the game’s goals are, and what success looks like.

Agreed rules can be observed whenever:

Parten argues that cooperative play begins at around 4 years of age and continues for the remainder of a person’s life. It occurs during unstructured play, for example when children come up with their own imaginative cooperative games.

As children get older, their cooperation may become more structured and formalized. This may emerge during board games and sporting games, such as agreeing to follow the rules of a football game.

For general pros and cons of play-based learning, try this post here. 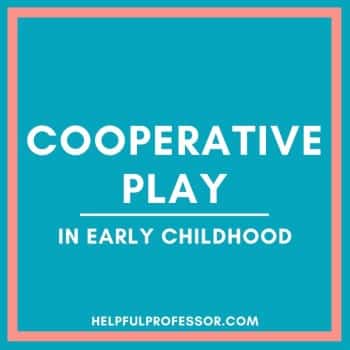 As one of Parten’s six stages of play, cooperative play is incredibly important for child development. By playing together, young children learn from one another and pull each other’s development forwards. Children play cooperative games and, by working together, develop a range of new skills. It helps young children develop a range of language, cognitive and social skills required for the 21st Century.