Quick Definition of the Humanistic Theory in Education

Definition: The humanistic theory of teaching and learning is an educational theory that believes in teaching the ‘whole’ child. A humanist approach will have a strong focus on students’ emotional wellbeing and eternally view children as innately good ‘at the core’.

A humanist educator’s teaching strategy will have four philosophical pillars. These pillars will guide the teacher’s beliefs and, ultimately, how they teach. These four pillars are:

Remember, it’s best to paraphrase definitions (e.g. put them in your own words). Then, you should reference your sources at the end of your sentence or paragraph.

Here’s my attempt at paraphrasing the above scholarly definitions:

Now that you’ve got your definition and scholarly sources, don’t forget to include your references at the end of your essay:

The above references for the above sources. They’re in APA format, so if you are required to use another format like MLA, Chicago or Harvard, you’ll need to convert these to the correct style.

In the early 20th Century (early 1900s), behaviorism and psychoanalysis were the dominant educational theories. Humanists thought both these theories had very negative perceptions of learners. These theories tried to diagnose and ‘fix’ learners.

In reaction, humanistic education emerged. Humanists argued that people should stop seeing learners as ‘defunct’ or ‘in deficit’. Instead, humanists focussed on how we could help learners bring out the best in themselves.

Another thing humanism rejected was the assumption that learners were easily controlled by rewards and punishments. Humanists thought this ‘behaviorist’ approach of rewards and punishments failed to see that humans are complex thinkers. We’re driven by many different factors, and one major one is of course our emotions: how we’re feeling.

You can’t just punish someone when they do something wrong. No, no, no!

To humanists, you need to explore the factors underpinning their bad behavior. Maybe they’re cold, hungry or feeling unsafe! If we fix the underlying problem, the person will probably start behaving more appropriately.

So, humanists emerged largely as a reaction to the negativity and simplicity of behaviorist beliefs about childhood. If you want to learn more about behaviorism, check my post on behaviorism out here.

3. A Focus on Emotions

Our emotions are important to humanists. Emotions (or what we often refer to in educational psychology as ‘affect’) will shape how, what, when, and how well we will learn something.

If you’re grumpy, sad, frustrated or distressed, you’re probably not going to learn too well. When I’m worried about something, I spend all my time thinking about it – and I forget to concentrate!

So, humanists think we should pay attention to emotions and make sure our learners are feeling positive, relaxed and comfortable. These are emotions that will make us ready to learn.

In fact, humanists think other theorists like behaviorists, cognitivists and sociocultural theorists don’t pay enough attention to emotions. While other theories pay attention to things like social and cognitive (mental processes) learning, they seem to overlook that our emotions have a really important impact on how well we learn.

Humanists want to solve that problem. Below, you’ll read all about different ways in which they do this.

We are all fundamentally good people, humanists argue. We’re not born evil or start out with evil intentions. And we all seem to want the best for ourselves and our tribe.

So why do people end up being bad, even evil?

Well, according to humanist theorists, people do bad things because they have not been nurtured the right ways.

When our fundamental needs as humans are not fulfilled, we might act out. When a young person is treated inhumanely in childhood, they may go on to act inhumanely as a response. When someone is hungry, they may get grumpy and act out. But, if we treat young people well and ensure their needs are cared for, they’ll be able to focus on being good, well-rounded and fulfilled human beings.

So, something really nice about humanism is that humanist teachers tend to see the good in their students. Even when a student is playing up, the teacher doesn’t hand out punishments to try to ‘fix’ the student. Instead, the teacher says “what needs aren’t being fulfilled here?”

You need to know about Abraham Maslow. If you write an essay on humanist education and don’t mention him, expect to lose marks.

So here are some basics about Maslow to get you off on the right foot:

I got the above information from this scholarly book:

Maslow’s Hierarchy of Needs is a famous pyramid that shows the fundamental things that people need in order to be fulfilled in their lives.

Background to the Hierarchy: Maslow created the Hierarchy of Needs after examining the lives of a group of highly successful people including Mahatma Gandhi, Albert Einstein, Abraham Lincoln and Elanor Roosevelt. According to Maslow, each of these successful people had each of these needs fulfilled, which let them climb to the top of the pyramid and reach ‘self-actualisation’ (a sense of fulfilment). Maslow thought only about 1% of all people reached self-actualisation.

The hierarchy has two types of needs:

Maslow thinks all of us strive to meet the needs on his pyramid every day of our life, but only few of us make it all the way to the top. Supposedly, we can’t meet higher-up needs until we’ve successfully met the lower needs on the pyramid. 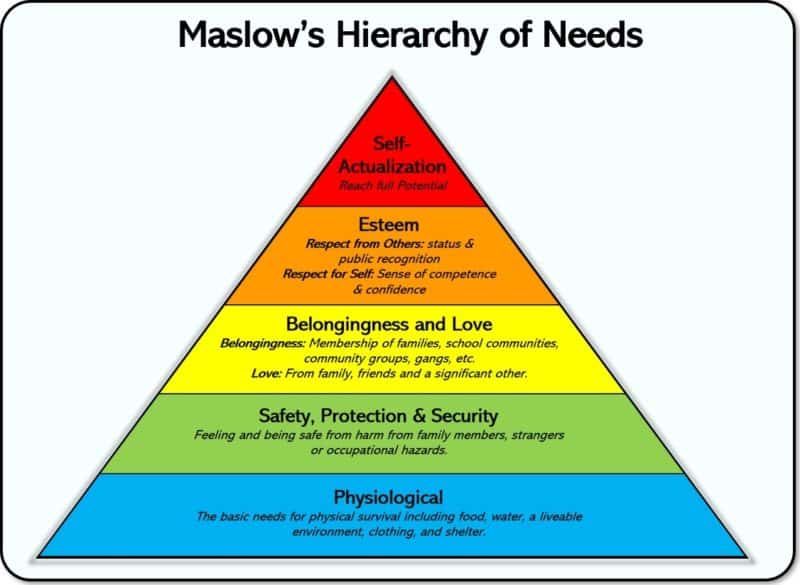 7. Examples of Maslow’s Hierarchy of Needs in the Classroom

Most teachers expect you to use examples in your essays. So, let’s take a look at some examples of each of Maslow’s needs in education:

a) Examples of Maslow’s Physiological Needs in the Classroom

b) Examples of Maslow’s Safety Needs in the Classroom

c) Examples of Maslow’s Belongingness Needs in the Classroom

d) Examples of Maslow’s Esteem Needs in the Classroom

8. Strengths and Limitations of Maslow’s Hierarchy of Needs

Here are the pros of Maslow’s Hierarchy:

Here are the cons of Maslow’s Hierarchy:

(Note: later in this article there is also a list of general strengths and limitations of humanist theory overall, which you can jump to by clicking here.)

9. Carl Rogers: The other Humanist Theorist

Carl Rogers was another highly influential humanist theorist. If you’re writing an essay about humanism in education, I strongly recommend you also write about Rogers’ ideas.

“I become very irritated with the notion that students must be “motivated.” The young human being is intrinsically motivated to a high degree. Many elements of his environment constitute challenges for him. He is curious, eager to discover, eager to know, eager to solve problems. A sad part of most education is that by the time the child has spent a number of years in school this intrinsic motivation is pretty well dampened.” (Rogers, as cited in Schunk, 2012, p. 355).

Related Post: Intrinsic vs. Extrinsic Motivation in the Classroom.

10. Examples of Carl Rogers’ Humanistic Theory in the Classroom

If we are to follow Rogers’ humanistic teaching approach, we would do some of the following things:

11. Strengths and Weaknesses of the Humanist Theory of Education

Strengths of humanism in education include:

Weaknesses of humanism in education include:

Cite these Sources in your Essay 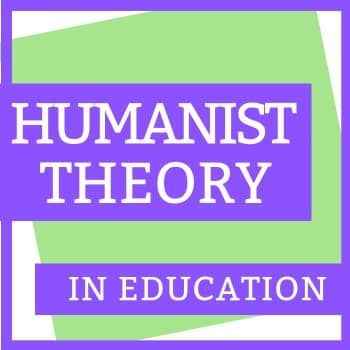 Don’t forget that you need to cite scholarly sources in your essays!

Here’s the APA style citations for some sources I used when writing this article:

Bates, B. (2019). Learning Theories Simplified: …and how to apply them to teaching. London: Sage.