Children begin to develop pretend or ‘imaginative’ play behaviors around age 2 and continue to engage in this sort of play for the remainder of their lives. It is a necessary skill for moving through Piaget’s preoperational stage of development.

Pretend play has many names and overlaps with other versions of play such as imaginative, fantasy, role and socio dramatic play.

We use the term ‘imaginative play’ when children break the rules that govern our world. You might see this type of play when children are pretending they have magical powers or imagining they are flying.

Fantasy play involves fantasizing about something while also breaking in and out of the dramatization. You will often encounter young children turning to one another and saying “how about we change it so we do X now?” Fantasies often include young children embodying the position of hero (or even superhero) whose role is to save the world from evil.

Socio dramatic play involves the dramatization of events in groups. It requires cooperation during play, where children often occupy roles (see also: Role Play). A central feature of the sociodramatic variation is that is requires extensive use of language, making it an excellent form of play for language development and sociocultural learning scenarios.

Role play involves trying on and embodying different identities during play scenarios. A role play situation might involve role playing domestic scenarios such as cleaning (domestic role play) or fantasy identities such as firefighter or superhero (incorporating elements of dramatic play). Role play is often social, but can also be a form of solitary play.

Pretend play is characterized by use of imagination (including fantasy and dramatization), role play (trying on identities), and symbolism (such as pretending a wood block is a car).

As children approach 2 years of age, they will begin to use their imagination to develop fantasies during their play. Children use their imagination to develop narratives during their play that may or may not reflect real life. At the start, young children’s play usually reflects narratives they have seen on movies or elsewhere in their lives. They then extrapolate upon those narratives to create new story lines. As children get older, their fantasies get more and more inventive, creative and removed from narratives they have observed in real-life.

During pretend play, children try on different identities such as:

At the start, these identities may reflect those close to their home such as mom and dad’s identities. They will later try identities from their favorite books and movies. Trying on identities is beneficial for children as they try to understand who they are in the world. Successful navigation of identity structures helps them to choose an identity that they are most comfortable with and helps them fit in (or stand out). However, it is also believed that the trying-on of identities may be the beginning of reinforced gender roles in childhood.

3. Use of Symbols and Metaphors

Pretend play also often involves the use of symbols and metaphors. In this sense, it overlaps significantly with what we call ‘symbolic play‘. Symbolic play tends to emerge quite early in childhood – for example, when children push blocks around the floor and pretend they are cars. More complex symbols and metaphors include pretending you are a superhero, pretending to sip tea out of teacups, and pretending your toys are real-life friends.

There is no clear rule about when pretend play emerges, but a general rule-of-thumb is that it is somewhere between 3 months and 4 years, with 2 years of age being a commonly cited age marker.

Mildred Parten developed 6 linear stages of play. Parten claims that imaginative, symbolic and fantasy activities tend to emerge in the ‘Solitary Play’ stage of development – between 3 months and 2 1/2 years. Here is Parten’s guide:

Mary D. Sheridan argues that pretend play emerges a few months before a child’s 2nd birthday. Here are her linear guidelines for emergence of play behaviors:

Adults can strongly influence the emergence of imagination and make-believe during play. This can be both positive and negative.

When students start employing role play during their games, gender roles become an inevitable issue. Parents and teachers will often notice their child talking about ‘boys’ vs ‘girls’ in their play scenarios without prompting. Adults may have inadvertently influenced children’s ideas of gender roles. The relationship between mom and dad is a first indication. Toys and games we expose our children to may also give them subtle hints about what gender roles children should embody.

In media, Disney films and other children’s movies may teach children gender roles such as ‘princes and princesses’ and heteronormative domestic behaviors. Children may express these learned behaviors during their play narratives.

Through pretend play, children learn creativity and skill development. It is only one of over 17 different types of play, but one that should be used in connection with other versions of play to help children to get a holistic range of childhood experiences.

About The Author: Hi, I’m Chris Drew (Ph.D) and I run things around here. I’m an Education expert and university professor. 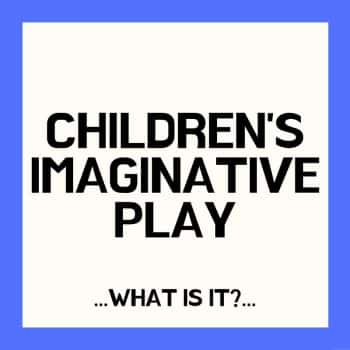