Definition of the Lasswell Model of Communication

Definition: The Lasswell Model of Communication is a framework for critiquing and deconstructing the elements involved in mass communication. The model asks 5 questions: Who? Said what? In which channel? To Whom? With what effect? It is best known as the original ‘linear model’ because it conceptualizes learning as moving in only one direction.

The 5 Components of the Lasswell Model of Communication

Here is a quick visual overview of the model:

Here is an explanation of each component:

The ‘who’ refers to the person who is sending the message (the ‘sender’ or ‘communicator’).

Example: A sender may be:

How to analyze: Control analysis.

Lasswell argued that if you want to study who has control over a message, you need to look at this first component: the sender. He used the term ‘control analysis’ to propose that by looking at the sender, you can critique how they exercise control or power over the message that is being sent out.

Today, there is a much more diverse range of communicators than in Lasswell’s days. With the internet, anyone can publish and send information online through websites, blogs and social media to large audiences.

This may mean there are many more voices in the media landscape. Whereas once people got their news from only a few sources, now they can get it from different senders online. There will be more minority identities such as women and people of color out their sending messages now, thanks to enhanced freedom to publish online. However, it may also empower people with hateful ideas to share their ideas, too.

Next, Lasswell says that we should analyse what is being said by the sender. This is this message being communicated.

Common messages we receive include:

Lasswell is credited as being one of the founders of content analysis. When we analyze the content of a message, we actually look at what is being said.

To do this, scholars usually get a transcription of a speech and read over the writing. They will highlight important passages, identify themes in the text, and explore how the message has biases or bends the truth.

Some things we might consider when looking at the message are:

Impact of new media on messages: Increased diversity of messages.

Just as there are more senders, so too are there more messages than ever before.

While some might argue that this is a good thing for diversity of views, it also seems to have given rise to fake news as people are more able to pick and choose which messages they read. If we only read messages that reinforce our views, we may become increasingly more and ore biased.

iii) In Which Channel?

The medium is the means by which the information is transmitted from the sender to the receiver.

Some traditional media examples include:

When Lasswell made up his theory this was all we had! But, nowadays there are so many more mediums for communication such as blogs, online videos, cell phones, podcasts, and so on!

How to analyze: Media analysis

Media analysis looks at different types of mediums and tries to find out which is best for sending a message to an audience.

An analyst may examine existing media that promotes a similar message to the one they are presenting and try to find out:

The internet has opened up a range of new channels of communications, such as:

However, it has also led to the decline of old media like:

When Lasswell developed his model, he was thinking about mass media. Mass media tends to have the following audiences:

How to analyze: Audience analysis

Audience analysis involves looking at the audience to determine which message works best with which types of people.

To do an audience analysis, you need to look at current or potential audiences and try to figure out what they like and what messages would work with them.

You would tend to break down audience preferences by categories like:

Now that new media are around, messages can be communicated to much more specific sub-sets of audiences. Advertisers also have much better access to analytics so they can target the specific needs of audiences.

v) With what effect?

For most communicators in modern capitalist societies, the intended effect is for you to spend your money! But, there are others:

How to analyze: Effects analysis

An effects analysis takes place after the sender has communicated their message. They might commission a researcher to go into the field and find out how well-known the brand has become, or whether the message has impacted public opinion.

With new media, communicators can find out the effects of their messages instantly. A website owner will know how long you sent on the site and whether you bought something from them. A facebook campaign will be able to see how many people saw their ad and how many people liked or commented on it.

A broader social effect of new media is that it is causing us to live in our own little bubbles. We only engage with media we want to engage with. We choose who to read online and who to believe. This may be causing society to become more divided.

Examples of Lasswell’s Model of Communication

Who was Harold Lasswell?

Lasswell is one of those Renaissance Men of academia who was influential in tons of different fields, including politics, communication and media studies, law, economics, philosophy, psychology, sociology and anthropology.

But, his greatest influences on the world were:

(want to use that fact in an essay? Cite Post (2001) or Eadie (2011). Full citations for these two sources are provided at the bottom of this page).

Advantages and Disadvantages of the Lasswell Model of Communication

Here are the key pros of Lasswell’s model:

Here are they key cons of Lasswell’s model:

Quotes for your Essay

>>>RELATED ARTICLE: THE IMPORTANCE OF MANAGERS IN THE 21st CENTURY 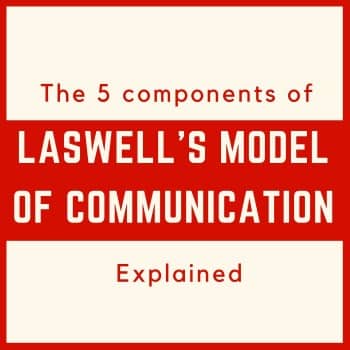 Scholarly Sources for your Essay

Wait! Don’t cite my website (seriously, don’t!) You’ll probably get marked down in your essay if you do that! Your professor wants to see you citing scholarly sources.

So, now that you understand the topic, go ahead and cite the scholarly sources listed below. I’ve listed them in APA format here. If you need to use a different format, read how to cite the different referencing styles in my article: how to reference in an essay.

Here are the sources you should cite in your essay:

Lasswell, H. D. (1948). The Structure and Function of Communication in Society. In: Bryson, L. (ed.). The Communication of Ideas. (p. 117.) New York: Institute for Religious and Social Studies.