Quick Definition of the Osgood-Schramm Model of Communication

Definition: The Osgood-Schramm model of communication is defined as a circular model that shows that messages go in two directions. The model has four key principles: (1) Communication is circular not linear; (2) Communication is usually equal and reciprocal; (3) Messages require interpretation; (4) there are three steps for communicating: encoding, decoding and interpreting. 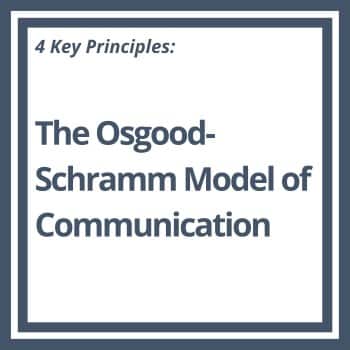 The Osgood-Schramm model of communication is a communication theory. It explains how we communicate with one another, mainly though speech, writing and discourse. It emphasizes four key principles:

How does the Circular Model Work?

The image above shows how the Osgood-Schramm model works. It involves circular communication between two people. Each person is both a sender and a receiver. They are therefore able to communicate to one another, rather than only in one direction.

This circular feature of the model is very different from other liner models of the time like the Shannon-Weaver model or Lasswell’s model of communication.

When critiquing linear or ‘transmission’ models such as the Shannon-Weaver model, Schramm argued:

“In fact it is misleading to think of the communication process as starting somewhere and ending somewhere. It is really endless. We are really switchboard centers handling and re-routing the great endless current of information.” (Schramm, 1955)

Schramm was insistent that communication is not simply the passing of a packet of information from a sender to a receiver. Instead, he saw that messages must be interpreted in order for them to be understood.

As two-way communication keeps on going in its circular pattern, the semantic noise is ideally reduced because the two communicators can come to shared meaning and give one another further clarification on what they actually mean.

Note: Some people call semantic noise a weakness of this model. However, this model simply shows that semantic noise is possible – so it’s not a weakness. If anything, it’s good that the authors have shown us what it is and how it works.

You can see in the image above that each actor in the communication sequence has three roles: encoding, decoding and interpreting.

Here’s how each step works:

Once someone has decoded and interpreted a message, they can then go about encoding their own message to send back to the original sender. They would in turn go about decoding and interpreting. The cycle continues!

This equal communication model is very different to many others, which see communication as a one-way street where people take the role of either ‘sender’ or ‘receiver’. By contrast, Schramm’s model sees the participants as both sender and receiver of messages.

>>>RELATED ARTICLE: THE IMPORTANCE OF MANAGERS IN THE 21st CENTURY

What are the Pros and Cons of the Osgood-Schramm Model?

Benefits / Strengths in the Osgood-Schramm Model

Disadvantages / Weaknesses in the Osgood-Schramm Model

When was this Circular Model Developed?

Wilbur Schramm developed the model in 1954 – quite some time ago! He built the model as a response to (and indeed as a rejection of) Shannon and Weaver’s one-way transmissionist model.

Great Quotes for your Essay

Okay, I know what my readers want. You want someone to explain concepts to you clearly. Then you want quotes and academic citations that you can use in your own essay! Well, you’ve got it:

Tip: You can use the Google Books Previews function to view each of these authors’ explanations of the model. E.g. view Mcquail and Windhall’s book preview here.

Cite these Sources for your Essay

Remember that scholarly sources should be cited when writing an essay. Use the following APA style citations. If you need to change it to another style, get advice on our page on how to reference in an essay.