The Westley and Maclean model of communication is a framework for understanding how we communicate.

Features of the model include:

The 9 Key Elements of the Model 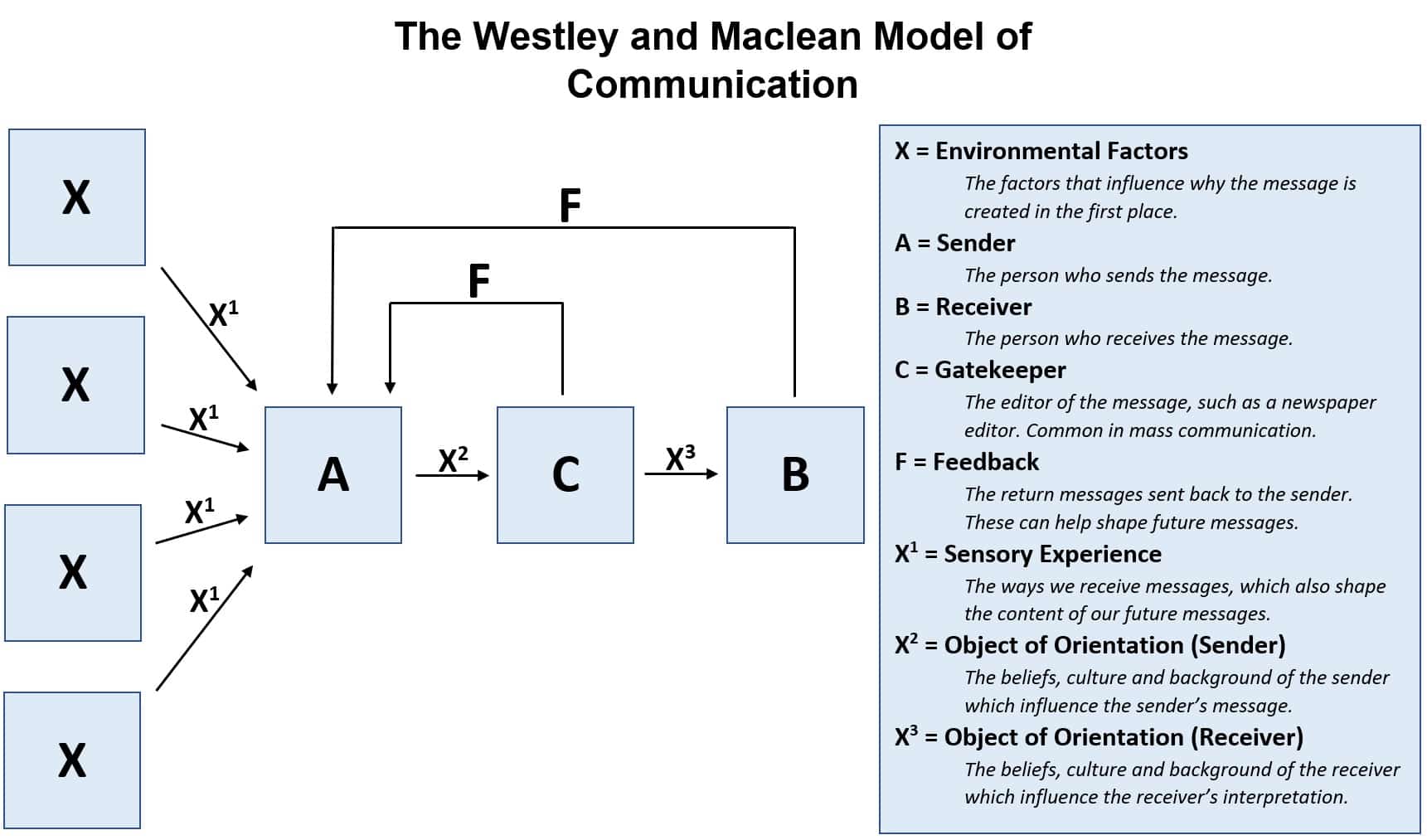 The 9 key elements are listed below:

Environmental factors that impact a message could include:

Acknowledgement of the presence of the environment in communication helps us to focus on the social and cultural contexts that influence the ways we communicate and the messages we receive.

The speaker experiences something in their environment in some way or another, which motivates them to send their message.

The speaker may receive the initial stimulus by:

The way we experience the environmental stimulus may impact how we send our message (see: “object of orientation of the source” below). If our experience is a positive one, we might create a positive message about our idea. If our sensory experience is negative, it is likely that our message will be critical of the idea.

Examples of sources include:

4. Object of Orientation of the Source (X2)

The object of orientation of the source is the subjective beliefs or experiences of the person sending the message. All of us approach and interpret information with our own cultural or social perspectives. These will impact how we send a message.

Objects of orientation include:

The receiver is the person who gets the message.

Examples of the receiver include:

6. Object of Orientation of the Receiver (X3)

The object of orientation of the receiver is the subjective beliefs or experiences of the person receiving the message. The receiver will decode a message using their own personal perspectives.

Examples of objects of orientation of the receiver include:

The Westley-Maclean model sees feedback loops as important for influencing how messages are sent. This makes this model a circular model (like the Helical Model, Shannon-Weaver and Osgood-Schramm models) rather than a linear model (such as the Lasswell model)

Feedback loops involve having the receiver and gatekeeper (see below) sending messages back to the message sender. This may stimulate the message sender to create a new message that has been refined based on the feedback sent.

Gatekeepers are more common in mass communication than interpersonal communication. They are the editors of messages before they are passed on to the receiver.

Examples of gatekeepers include:

Some more modern forms of mass communication or ‘new media’ such as blogs and vlogs do not have gatekeepers. The advantage of new media is that it allows information to pass through to the receiver without being filtered.

Westley and Maclean believe one key person in the mass communication process is an opinion leader. This person may have an oversized influence as an environmental factor (X) upon the message sender (A).

Examples of opinion leaders include:

Explanation of How the Model Works

The Westley and Maclean model of communication believes a communication event begins when an environmental factor stimulates a person to create a message. They may hear or see something that they feel they need to talk about.

Once the environmental factor kicks-off the communication process, the message is formed by the sender. The sender creates a message that is influenced by how they interpret the message (their sensory experience) as well as their own subjective opinions on the matter (their object of orientation).

Once the message is sent, it may pass through a gatekeeper such as an editor before it is approved for sending through to the receiver. The gatekeeper may send the message back to the sender with feedback to ask them to change the message. Gatekeepers are more common within traditional mass communication (such as newspaper editors) than new media such as blogs, which anyone can write!

The receiver will get the message, but must decode it. Their decoding will involve applying their own subjective interpretation of the message (aka the receiver’s object of orientation). The receiver may send feedback to the sender, which could spark another round of communication.

Advantages and Disadvantages of the Westley & MacLean Model of Communication

The biggest strength of the Westley and Maclean communication model is its acknowledgement of environmental factors and subjective interpretations in communication. This enables us to examine how and why a message is shaped the way it is.

However, the model is vague on discussions of noise and feedback which (while acknowledged) is not as clearly put forward as other models such as the Shannon-Weaver model.

Lacy, S. (1989). The Westley-MacLean Model Revisited: An Extension of a Conceptual Model for Communication Research.  Paper presented at the Annual Meeting of the Association for Education in Journalism and Mass Communication. Washington, DC: ERIC.

Manca, L. (2015). A hypothesis about the role of gateopener in the Westley-MacLean model. In: Manca, L. & Kauth, J. (Eds.). Interdisciplinary essays on environment and culture: one planet, one humanity, and the media. (pp. 69 – 82). New York: Lexington Books.