The Shannon and Weaver Model of Communication is a mathematical theory of communication that argues that human communication can be broken down into 6 key concepts: sender, encoder, channel, noise, decoder, and receiver. A later version of the theory by Norbert Weiner added a 7th concept (‘feedback’) which changed the model from a linear to cyclical model.

It is known as the “mother of all models” because of its wide popularity. The model is also known as ‘information theory’ or the ‘Shannon theory’ because Claude Shannon was the main person who developed the theory.

The model’s primary value is in explaining how messages are lost and distorted in the process of communication.

Definition of the Shannon and Weaver Model

The Shannon and Weaver model is a linear model of communication that provides a framework for analyzing how messages are sent and received.

It is best known for its ability to explain how messages can be mixed up and misinterpreted in the process between sending and receiving the message.

Shannon, in his famous article titled “A Mathematical Theory of Communication” where he outlined the theory, explained what the goal of his model was:

“The fundamental problem of communication is that of reproducing a message sent from one point, either exactly or approximately, to another point” (Shannon, 1948, p. 379).

Using this mathematical theory of communication, he hoped to more effectively identify those pressure points where communication is distorted.

The Shannon Weaver model was first proposed in the 1948 article “A Mathematical Theory of Communication” in the Bell System Technical Journal by Claude Shannon and Warren Weaver:

Explanation of the Shannon and Weaver Model

A sender can send a message in multiple different ways: it may be orally (through spoken word), in writing, through body language, music, etc.

Example: An example of a sender might be the person reading a newscast on the nightly news. They will choose what to say and how to say it before the newscast begins.

The next step in the Shannon Weaver model is the ‘encoder’. The encoder is the machine (or person) that converts the idea into signals that can be sent from the sender to the receiver. The Shannon model was designed originally to explain communication through means such as telephone and computers which encode our words using codes like binary digits or radio waves.

However, the encoder can also be a person that turns an idea into spoken words, written words, or sign language to communicate an idea to someone.

The next step in the Shannon Weaver model is the ‘channel’. The channel of communication is the infrastructure that gets information from the sender and transmitter through to the decoder and receiver. We sometimes also call this the ‘medium’.

Examples: A person sending an email is using the world wide web (internet) as a medium. A person talking on a landline phone is using cables and electrical wires as their channel.

If we’re face-to-face, perhaps we don’t have a channel, except the sound waves from our voice that carry the sound from the sender’s mouth to the receiver’s ear.

The next step in the Shannon Weaver model is ‘noise’. Noise interrupts a message while it’s on the way from the sender to the receiver. It’s named after the idea that ‘noise’ could interrupt our understanding of a message. There are two types of noise: internal and external.

One of the key goals for people who use this theory is to identify the causes of noise and try to minimize them to improve the quality of the message.

Examples: Examples of external noise may include the crackling of a poorly tuned radio, a lost letter in the post, an interruption in a television broadcast, or a failed internet connection.

Examples of internal noise may include someone having a headache so they can’t concentrate, someone speaking with a heavy accent, or when the sender mumbles when speaking.

The next step in the Shannon Weaver model is ‘decoder’. Decoding is the exact opposite of encoding. Shannon and Weaver made this model in reference to communication that happens through devices like telephones. So, in this model, there usually needs to be a device that decodes a message from binary digits or waves back into a format that can be understood by the receiver.

If we’re talking about direct communication between people without the use of technology, there may still be a need for decoding. For example, you might need to decode a secret message, turn written words into something that makes sense in your mind by reading them out loud, or you may need to interpret (decode) the meaning behind a picture that was sent to you.

Examples: Decoders can include computers that turn binary packets of 1s and 0s into pixels on a screen that make words, a telephone that turns signals such as digits or waves back into sounds, and cell phones that also turn bits of data into readable (and listenable) messages.

The next step in the Shannon Weaver model is ‘receiver’ The receiver is the end-point of the original Shannon and Weaver model of the technical communication process. This is the step where the person finally gets the message, or what’s left of it after accounting for noise.

Examples: Examples of a receiver might be: the person on the other end of a telephone, the person reading an email you sent them, an automated payments system online that has received credit card details for payment, etc.

The final step in the Shannon Weaver model is ‘feedback’. Actually, the ‘feedback’ step was not originally proposed by Shannon and Weaver in 1948. Norbert Weiner came up with the feedback step in response to criticism of the linear nature of the approach. (‘Linear’ means that the messages are only going one way).

Feedback occurs when the receiver of the message responds to the sender in order to close the communication loop. They might respond to let the sender know they got the message or to show the sender:

Nonetheless, the ‘feedback’ elements seems like a post-hoc add-on to the model, and is the subject of a lot of criticism (see later in this article on ‘disadvantages of the model’ for details).

Examples: Feedback does not occur in all situations. Sometimes, like when watching TV, we don’t tend to let the people talking on the TV know what we’re thinking … we simply watch the show.

Some times when feedback will occur include:

Examples of the Shannon Weaver Model of Communication

The Shannon-Weaver model of communication was originally proposed for technical communication, such as through telephone communications. Nonetheless, it has been widely used in multiple different areas of human communication.

Here are some examples of how the Shannon Weaver model works:

a) A telephone conversation

Sender: The sender is the person who has made the call, and wants to tell the person at the other end of the phone call something important.

Encoder: The telephone turns the person’s voice into a series of binary data packages that can be sent down the telephone lines.

Channel: The channel is the telephone wires itself.

Noise: Noise may occur if the speaker mumbles, the telephone wires are interrupted in a storm, or the telephone encoders/decoders are malfunctioning.

Decoder: The telephone that the receiver is holding will turn the binary data packages it receives back into sounds that replicate the voice of the sender.

Receiver: The receiver will hear the sounds made by the decoder and interpret the message.

Feedback: The receiver may speak in response, to let the sender know what they heard or understood.

b) Listening to the radio

Sender: The radio host will speak into her microphone.

Channel: The channel will be the radio waves that are sent out by the radio transmitter.

Decoder: The decoder is the receiver’s transistor radio, which will turn the radio waves back into voice.

Receiver: The receiver is the person listening to the radio, who will hopefully receiver the full message loud and clear if noise has been avoided or minimized.

Feedback: Feedback is difficult in this step. However, the radio channel may send out researchers into the field to interview listeners to see how effective their communication has been.

Here’s another example of how the Shannon and Weaver model of communication might work for human communication:

Sender: The person starting the conversation will say something to start the communication process.

Encoder: The ‘encoder’ step is usually used to explain a machine that encodes a message for transmission. For a face-to-face discussion, you could consider the ‘encoding’ to be the ways the sender turns their idea into intelligible words and sentences.

Channel: There isn’t any wire or radio waves involved here – instead, the sound is transmitted through sound waves made by the voice.

Noise: The sender may have mumbled or have an accent that caused the message to be distorted (internal noise). There might be a wind or traffic that made the message hard to hear (external noise).

Decoder: While there’s no machine here, the listener still has to turn the words they hear into a legible message in their mind.

Receiver: The receiver is the second person in the conversation, who the sender is talking to.

Feedback: Face-to-face communication involves lots of feedback, as each person takes turns to talk. If someone’s message is not heard to to noise, they can ask for clarification easily.

Advantages and Disadvantages of the Shannon Weaver Model

The Shannon and Weaver model of communication has many pros and cons. Here are a few:

1. It explains the barriers to effective communication very well

The Shannon Weaver information theory was revolutionary because it explains the concept of ‘noise’ in detail. It shows how information is interrupted and helps people identify areas for improvement in communication.

For example, the model also includes three ‘levels’ where communication can be interrupted. These are: technical problems, semantic problems, and effectiveness problems:

2. It breaks down communication into understandable parts

The model enables us to look at the critical steps in the communication of information from the beginning to end.

The communication model was originally made for explaining communication through technological devices. However, it’s been used to explain just about any form of communication you can think of.

1. It’s a Linear Model / There’s insufficient regard for Feedback

The original 1948 Shannon Weaver blueprint did not contain the ‘feedback’ component. When it was added by Weaver later on, it was included as a bit of an afterthought.

Thus, it lacks the complexity of truly cyclical models such as the Osgood-Schramm model.

The model doesn’t take a social scientific look at how information is interpreted differently based on power relationships or identities of those people communicating with one another.

The ‘mother of all models’ is silent on the issues that arise when there is one sender and multiple receivers. For a better analysis of mass communication, use a model like the Lasswell model of communication. 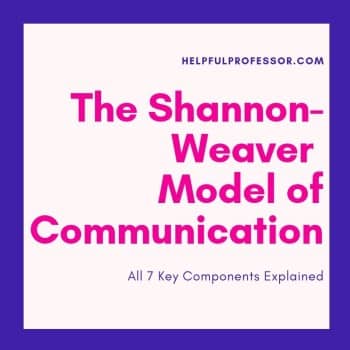 Al-Fedaghi, S. (2012). A conceptual foundation for the Shannon-Weaver model of communication. International Journal of Soft Computing, 7(1): 12 – 19.