There are 4 types of norms in sociology. These are: folkways, taboos, mores, and laws. They increase in a scale of severity from folkways, which are implied norms, through to laws, which are enforced by the state.

The concepts of folkways and mores were introduced in sociology by William Sumner in the early 1900s. Sociologists, criminologists, and anthropologists have, since then, generally looked at cultural and social norms through the lens of these four norms.

Types of Cultural and Social Norms

Definition: Folkways are customs that people within a society follow. They are often implicit, meaning that you may not have been taught about the folkways in your culture. Instead, you learned them by being embedded in a culture while growing up.

Examples: These are small little customs like covering your mouth when you yawn, trying not to smoke downwind of others, or making sure you say thank you to the grocery store clerk. Read more examples of folkways in sociology.

Severity: If you break a folkway, you might be considered a little strange, but no one will be too upset. You just might not make friends! People who understand folkways are usually more liked and socially accepted.

Definition: Mores are moral norms. The term ‘more’ comes from ‘morality’. If you break a more, society will consider you to be immoral. Some mores are illegal (making them also laws), while others are not.

Examples: Talking behind a friend’s back could be considered immoral and therefore a more that has been contravened. It’s not illegal to gossip, but people will frown upon you and consider you to have broken moral standards. Read about more examples of mores in sociology.

Discussion: Mores are often the hardest to identify because they can also be a folkway, taboo, or a law at the same time. If the social norm has a layer of morality involved, chances are it’s a more. Generally, we look at a more as something that has a clear ‘right or wrong’.

Severity: Breaking a more will likely get you shunned by your community and friendship groups, but unlike taboos, they’re also things that are openly discussed, which makes it easier to know and understand them. 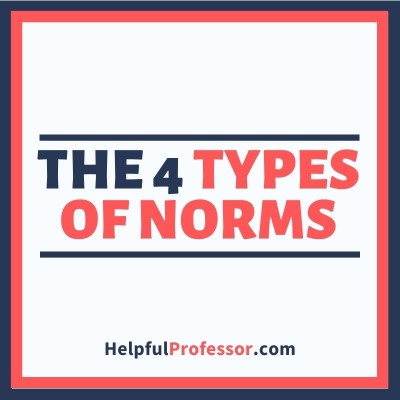 Definition: Taboos are social norms in a society that are considered shocking if you break them. They’re often things that no one talks about because they’re so embarrassing and socially unacceptable.

Examples: Taboos in American culture include adultery, flirting while married, and spitting at others. Read about more examples of taboos in sociology.

Discussion: Taboos are often things that are silently whispered about because they’re so unacceptable. They’re things kept secret and especially not talked about in front of children. They will often leave people shocked when people break them.

Severity: While taboos may not necessarily be written into law (although they can be), they are considered to be very severe. If you break one, you may be so embarrassed that you might not be able to look people in the eye anymore.

Definition: Laws are cultural and social norms that are policed by the state. If you’re found to have broken a law, you could be fined or even go to jail.

Examples: Commonly, a society will pass laws related to violence against others, theft, and damage to property. Read about more examples of laws.

Discussion: In a democracy, society has come together to agree on what should be illegal and what shouldn’t be. Authoritarian societies might make many mores and taboos laws (such as the heavy policing of littering in Singapore), while liberal societies will only pass laws about the most severe contraventions of social norms.

Severity: This is the highest level of severity of all the four types of norms. If you break a law, you may find yourself in a lot of trouble.

There may be many different cultures within a society. This is called a ‘multicultural society’. For example, you may live somewhere where there are many Christians, Indians, Muslims, Egyptians, and African-Americans all living within the one society.

Norms change depending on the context. This can include:

Folkways vs Mores vs Taboos

Folkways vs Mores: Mores are moral norms while folkways are customs that may not reach the level of morality, but just civility. For example, a person who spits on the sidewalk might not be seen as immoral but might be seen as a little rude. Spitting on the sidewalk is therefore a folkway, not a more. By contrast, if someone commits adultery, they are usually considered to have broken a moral code, so this is a contravention of a more, not a folkway.

Folkways vs Taboos: Folkways are customs while taboos are cultural (but not legal) prohibitions that are shocking if you break them. For example, it is taboo in America to ask a woman about her sex life. This goes beyond just a custom (which is just something that’s rude) and becomes a taboo because people would be a little shocked if you did this. You might even get fired if you do it in the workplace.

Folkways vs Laws: While folkways are just customs that are part of a culture’s way of doing things, laws are enforced by the government. Most societies only enforce laws that are severe breaches of norms, such as violence or theft.

Mores vs Taboos: Mores and taboos overlap a lot. A more is the contravention of a moral code, while a taboo is something that you shouldn’t do, and is shocking if you do it. Here, you can see that most taboos are also mores. While the definitions differ, many times you break a social norm, you are both breaking a norm and a taboo.

Mores vs Laws: Mores are moral norms, while laws are norms enforced by the government. Again, these overlap a lot. But, they overlap less than mores and taboos. That’s because most Western societies do not create laws around religious norms. In other words, religious norms about morality (aka religious mores) are often not laws. For example, in the United States, adultery is not illegal but Christians would consider it to break the norms set out in the Ten Commandments.

Taboos vs Laws: Taboos are not necessarily illegal, while laws are. In general, a taboo is something that society thinks you shouldn’t do because it is against society’s norms, and causes shock if it’s broken. It’s also something rarely spoken about (taboos are whispered in the night). But laws are openly discussed: so, laws are more obvious while taboos are more secret.

Related: Examples of Functionalism in Sociology

There are four types of norms: folkways, mores, taboos, and laws. They increase in level of severity from folkways (which are just customs) through to laws (which will get you in legal trouble if you break them).

Different societies will have different social and cultural norms. Furthermore, these change over time. As society evolves, so too do our values and norms.

Cultural and social norms even change between places inside a country. One area might be more conservative than another, for example.

Lastly, it’s important to remember that many of these types of cultural norms overlap. Some mores are also taboos and laws, while some aren’t. You need to look at the definitions in order to properly assign each norm to its right category.

Baier, M., & Baier, M. (2013). Relations between social and legal norms. Social and Legal Norms: Toward a Socio-legal Understanding of Normativity, 53-70.