Mores are moral norms, meaning they have an element of right or wrong. Some examples of mores include lying, stealing, gossiping, bullying, and trespassing.

In AP Sociology, you’ll learn that there are 4 different types of norms. Mores are just one type. The other three are folkways, taboos, and laws. Mores differ from the rest because they’re about what’s considered morally acceptable within a society or culture.

If you’re trying to figure out whether something is a more or not, think about it from a moral standpoint: would people consider it to be immoral or unethical if you did this thing? You might find that a lot of mores are also laws because the government has said “you’ll get in trouble if you do it!”

Examples of Mores in Sociology

We’re all told from a young age not to steal from others. It’s one of the basic mores that goes across nearly all cultures. It’s necessary to ensure that we all can live our lives without someone else taking anything we have from us. But, if you think about it, different cultures might draw the line at different points. some cultures might consider some property to be more shared property than private property (such as if your cousin comes over and takes food out of your fridge – would you consider that stealing or acceptable in your family unit?). 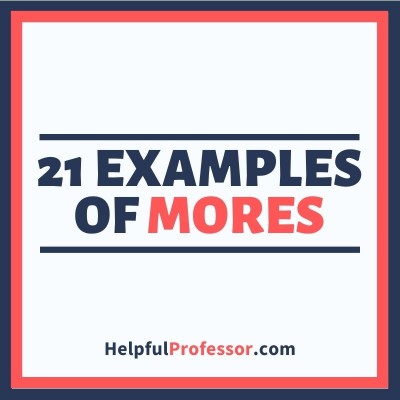 Our parents also teach us not to lie to one another … or to them! If you are known to lie a lot, people around you might not respect what you have to say. So, telling the truth is also something that you should probably do so that you are trusted and respected in your community. You could think about times where there are grey areas, however. For example, is it okay to tell a child a small lie so they don’t get their feelings hurt?

Depending on your society, culture, and probably also your religion, you might consider drinking alcohol to be a moral issue. If you think it’s immoral to drink alcohol, you’d consider this to be a more. If you think it’s okay to have one or two beers at the pub, then maybe not. Or, you might draw the line at excessive alcohol. Here, you can see that mores can be quite subjective sometimes.

Most societies consider taking illegal drugs to be immoral. There are usually laws in place to ban drug use, so this is usually also a law, which is another type of norm you learn about in sociology and criminology classes.

Marriage is something that’s common across most cultures, although beliefs about what is right or wrong in a marriage may differ. Most people would probably say you should remain faithful to your husband and wife, treat them with respect, and share everything you have with them. Others might also say that you should get married before you have children.

Gossiping is a norm that has moral element to it, which makes it more serious than just a folkway (which is another type of norm that’s simply a cultural custom). A gossip is someone who shares information that they shouldn’t be sharing. We’re taught not to gossip because it hurts people’s feelings. It could also make you pretty embarrassed if you’re caught gossiping about someone.

Trying not to be jealous is one of the ten commandments in Jewish and Christian teachings. The actual old-school saying is: “though shalt not covet thy neighbor’s goods”. Of course, many of us might feel jealousy as a natural human emotion. In that case, you might make every effort to try to clear out those emotions because you consider them to be immoral thoughts.

Most people would consider disrespecting parents as a moral issue. That’s because our parents sacrificed a great deal to raise us and they deserve respect from us for all they’ve done over our lives. So, this is likely to be considered more than just a folkway norm, but a social more.

When you break a promise, you start to be seen as an untrustworthy person. People won’t trust you with their information or even their belongings. You might also lose friends. So, this norm goes beyond social custom. It’s a norm that’s directly linked to who you are as a person. If you break a promise, people change their view of you and your personal ethics.

While bullying is unfortunately very common in schools, it is certainly an example of a more because it’s got a moral element. Bullying people can have serious long-term consequences. A bullied child may develop depression or self-esteem issues that can be very hard to overcome. So, it’s clearly more than just a folkway, but it’s not illegal so it’s not a law norm either. It’s a classic example of a more.

Imagine if someone close to you died and you didn’t go to their funeral! This is not illegal, of course, but it’s something that might cause people to question your moral character. Other things that it’s considered unacceptable to skip could include weddings, christenings, and court proceedings.

12. Laughing at Someone Else’s Misfortune

Laughing with other people is accepted and even enjoyed in society. But when your laughter is directed at somebody and it might hurt their feelings, these jokes are seen to be inappropriate. For jokes like this, we’ll often use the term ‘politically incorrect humor’.

Vandalism can include graffiti or intentionally breaking someone else’s property. It might even be a small simple transgression like scratching your name into a school desk. All of these types of vandalism are examples of mores because it’s more than just customary to avoid doing these things – we don’t vandalize because most people consider it to be immoral.

We’re raised from a very young age to learn to listen to the umpire and follow the rules during a sporting event. You might also be taught that it’s important to be a humble winner, and to shake hands with your opponent when you lose. But people who are rude in sports or even break the rules in order to win are considered to have crossed an important moral line.

15. Sneaking into the Cinema

Teenagers have for generations tried to sneak into the cinema and watch movies without paying for a ticket. They might even sneak their own food into the theater in order to avoid paying for popcorn. While we might not think this is the worst crime in the world, it’s still the wrong thing to do, and therefore it’s considered a more.

When you engage in fraud, you deceive someone in order to get your way. A great example is in the movie Catch me if you Can, where Leonardo Di Caprio plays the character of Frank, a fraudster. Frank pretends to be a pilot and flies around the world for free, fabricates money, and constantly lies about his identity. Here, this is clearly a more, but is also serious enough to be another type of norm: a law.

Bribery is another example of a more that can also be a legal norm. Bribery occurs when you pay someone in order to get a favor. This is common in some nations, for example, if you want to get the police to let you go for committing a crime. You pay money to the police so they look the other way. Of course, this is clearly morally wrong, making it a more, but is also nearly always illegal.

Cyberbullying is a special type of bullying that occurs online. It’s a particularly bad type of bullying because children are often bullied online when they’re at home, not just at school. It often occurs in chat rooms and on social networks like Facebook. Most people would, of course, consider this to be a moral wrong, making it a more. We often have netiquette rules to protect children from cyberbullying.

Extortion occurs when someone threatens someone else in order to get something off them. For example, you might threaten to harm someone unless they give you money. This is a high-level crime, meaning it’s not just a more but also a law. If you commit extortion, you’ll end up in a lot of trouble with the law! But of course, we also see it as morally wrong, which is why we see it as a more as well.

Trespassing occurs when you enter someone else’s property without their permission. You will often find signs on fences saying “trespassers will be prosecuted”. This means that someone doesn’t want you to enter their land, and they will call the police if you do. Walking on someone else’s property without their permission is often considered a moral issue, making it another example of a more.

Of the four types of norms in sociology, mores are the ones that have a moral component to them. They’re usually more serious than social norms like folkways, which are just customs. They also often overlap with laws because mores are often illegal. But, they sometimes are not laws, because sometimes we don’t make it illegal to do immoral things.

In fact, many mores are rights and wrongs based on personal religious values rather than values that span all of society. Some people may consider some things to be immoral and others not to be.