Technological determinism is the idea that technology shapes social change. It determines our future.

Technological determinism believes that advancements in technology are the moments that bring on each new phase in human history.

For instance, the invention of the wheel revolutionized human mobility, allowing humans to travel greater distances and carry greater loads with them. Thus, a technological advancement changed the course of human history for all time.

Other technological advances that caused great leaps in human history include:

Each were technological breakthroughs that altered the course of human history forever.

The term ‘technological determinism’ was coined by the American economist and sociologist Thorstein Veblen (1857-1929).

In the words of Merrit Roe Smith (1994), technological determinism can be summarized as:

The following are examples of how technology has determined and altered the future of human history:

1. The Invention of Writing

Walter J. Ong (1982) argued that writing fundamentally changed human society forever allowing it to break free from the limits imposed by the oral transmission of knowledge.

Walter Ong believed that oral culture tended towards rigidity and hierarchical control of society. Knowledge was held exclusively in the mind and human history was shared through the generations like a big game of telephone.

Writing, Ong believed, allowed easier access to knowledge to a large number of people. It also freed up the human mind from the need of constantly storing information in their minds – now, it could be recorded on paper (Ong, 1982).

Thus, one technological breakthrough altered the course of human history forever, making possible everything else that followed it.

The Princeton historian Lynn Townsend White Jr. in his book Medieval Technology and Social Change argues that the invention of the stirrup enabled the establishment of feudalism in Europe.

Feudalism remained the dominant mode of political and social organization in European society for nearly a millennium (White, 1962).

The stirrup, according to White, allowed combatants to engage their opponents from the advantageous position of being seated on horseback using weapons such as the lance and the longsword.

Thanks to horseback conflict, there emerged a class of cavalrymen who were rewarded for their services in combat with land grants, resulting in the development of feudalism.

The term ‘Gunpowder Empires’ refers to three Islamic empires of Turkic origin – the Mughal Empire in South Asia, the Safavid Empire in Persia, and the Ottoman Empire in Turkey.

These empires flourished between the 14th and 18th centuries on account of being early adopters of gunpowder-based artilleries.

This gave them greater military might and control over their own vast territories.

The things that made the Gunpowder Empires different from other empires were:

All these were the result of the advantage they enjoyed on the battlefield on account of their early adoption of gunpowder-based firearms.

Gunpowder had a lasting impact on the societies of the regions in which these empires flourished. In many cases, it laid the foundation for the modern nation-states that were to emerge as the successor states to these empires.

So, the national imagination of modern Turkey looks back at the Ottoman Empire as its cultural and spiritual predecessor, as witnessed by the phenomenal popularity of the Turkish TV series Dirilis: Ertrugrul that is based on the life of the founder of the Ottoman Empire (Khan, 2020) .

Similarly, the Mughal Empire directly inspired Islamic nationalism in South Asia, leading to the formation of modern-day Pakistan and Bangladesh, and leaving a deep and lasting influence on the culture of India ( where, for instance, the Mughal-era Taj Mahal is one of the most instantly recognizable visual icons)

Each of the three states still persists with many administrative, political, and cultural practices of the Mughal empire, thanks to the invention of Gunpowder.

4. The Printing Press and the Modern Nation-State

The Canadian media theorist Marshall McLuhan (1911-1980) was one of the foremost proponents of technological determinism.

In his influential book The Gutenberg Galaxy: The Making of Typographic Man, McLuhan argued that the invention of the printing press was a decisive technological breakthrough that changed human society forever.

It changed humanity by allowing the rapid and economical replication and dissemination of books and printed texts, allowing ideas, news, thoughts, and ideologies to spread at a pace never witnessed before in human history.

Expanding on McLuhan’s ideas, Benedict Anderson (1983) used the term “print capitalism” to describe how the printing press allowed for the creation of a cohesive society with a common language and common culture.

Weekly newspapers allowed for everyone within a nation to receive the same news in the newspaper every week. In turn, people started to see themselves as being part of the same shared culture (McLuhan, 1962).

This cohesive society then began to think of itself as an “imagined community”. Such imagined communities, according to Anderson, became the modern-day nation-states marking a radical departure from the way in which human society was organized in tribes (rather than nations) until now.

Anderson called nations ‘imagined communities’ to explain that most members of a nation will never meet each other, but through the technologies of mass media shared a culture.

The mass media is controlled by the state, and disseminates nationalist propaganda. So, it spread the idea of a shared culture across a single community.

Thus, one technology (printing press), determined the most prevalent form of political organization in human societies (the nation-state).

The internet and the microprocessor-based computer are the most disruptive technologies that have revolutionized the human experience on earth in the past century.

Think of how we can now communicate instantly with millions of strangers spread out in all corners of the planet. We can use our smartphones to capture pictures, listen to music, order food, and everything in between.

The internet has transformed our lives – and according to technological determinism, social change was inevitable after the invention of the internet.

Our lives, to a great extent, revolve around our smartphones and tablets connected 24×7 to the internet. It’s so ubiquitous in our lives that it is now replacing physical interaction as the preferred mode of communication.

New media and digital media have also become a means of mass mobilization, impacting politics, and in turn the organization of human society.

This is a technological transformation that is still unfolding, and its full impact will perhaps be known only to future generations. Can we imagine what the history of the 21st-century would look like had it not been for the internet?

As a grand theory, technological determinism covers the entire sweep of human history, right from prehistoric technologies such as the invention of the wheel to 21st-century changes such as cryptocurrencies. It provides a theoretical explanation for the evolution of all human societies.

The technological determinism theory is not rigid and can be adapted to explain complex phenomena.

For instance, the theory admits the possibility of 2 kinds of technological determinism – hard and soft.

Soft determinists believe that while technology is an important factor in shaping the course of human history, the manner in which humans interact with society also needs to be considered.

A reductionist theory is one that reduces a complex, multilayered phenomenon to a neat, oversimplified narrative.

Human interactions with technology and the effect of such interactions form a complex process that cannot always be reduced to a simple cause-and-effect relationship as envisioned by technological determinism.

2. Ignores the Question of Free Will

Technological determinism overlooks the role that human free will plays in the use of technology.

For instance, while the internet and smartphones are ushering in a technological revolution, many people are choosing to undergo what is popularly known as “digital detox” or a wilful avoidance of technology. 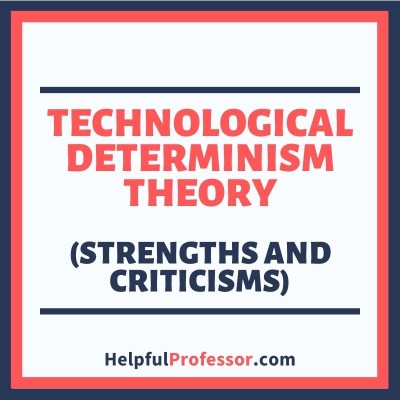 1. Writing did not Progress All Societies Equally

In the words of Langdon Winner (1980), the social construction of technology states that “what matters is not the technology itself, but the society in which it is embedded”.

As an example, consider the case of the invention of writing. According to classic technological determinism, the invention of writing should have led advanced societies down a trajectory of scientific and social progress. Societies that gained more widespread literacy should have advanced while those with restricted literacy would lag behind.  However, this has historically not been the case. Clearly, some societies benefitted more from writing (Western Europe) than others (African nations).

In societies such as medieval Christian Europe that Niezen characterized as ‘hot’, restricted literacy, confined mostly to the priestly class produced nonetheless a spirit of critical reform and questioning of religion that in turn resulted in enlightenment and the scientific revolution.

On the other hand in ‘cold’ societies such as Islamic west Africa that possessed widespread literacy, no criticism or revision of basic tenets of religion occurred, leading to a concomitant stalling of societal and scientific progress (Niezen, 1991).

Niezen concludes that the mere presence of widespread literacy does not define a society as being more progressive as had been hypothesized by Walter Ong and Marshall McLuhan.

Claude Fischer (1992) summarized the social construction of technology with the analogy of the billiard ball: technology is not something that comes from the outside and sets things in motion. It is born from within society.

Implications for Researchers, Educators, and Workplaces

1. Uptake of New Technologies in Classrooms

For example, if you give every child a laptop in school, will it cause them to be more technologically literate?

But the truth is that it’s not the technology that matters, but the uptake of that technology. If teachers choose not to implement the laptops in the classroom (or they don’t have the technological literacy to do so), then the laptops will simply serve as expensive bookends on the shelves!

Similarly, in workplaces, new technologies do not necessarily lead to innovation. Sometimes, they might stifle creativity or lead workers down the wrong path.

Often, we look at the different levels of access to technology between middle-class and working-class children as a moral concern. It may be disadvantaging those children from the start.

Here, the digital natives concept relies on technological determinism theory for its validity because it assumes availability of technology is sufficient to impact competence with such technologies.

The theory of technological determinism has pros and cons. It does show us how technologies can dramatically change the course of human history. And, particularly in today’s climate, we can see how the internet is changing the economic, political, and cultural makeup of society.

But we also run the risk of over-stating the impact of technology on the future. It’s not technology that determines our futures, but our uptake and use of technology. We as a society and individuals still have the free will to choose how to use technology and determine how it will and will not shape our own futures.

Anderson, B. (1983). Imagined communities: Reflections on the origin and spread of nationalism. Verso.

Fischer, C. (1992) America calling: A social history of the telephone to 1940. University of California Press.

Hodgson, M. G.S. (1974). The Venture of Islam: Conscience and history in a world civilization. University of Chicago Press.

Khan, A.J. (2020) Ertugrul: How an epic TV series became the Muslim Game of Thrones The Guardian.https://www.theguardian.com/tv-and-radio/2020/aug/12/ertugrul-how-an-epic-tv-series-became-the-muslim-game-of-thrones

Ong, W.J.(1982). Orality and literacy: The technologizing of the world. London: Routledge.