Colonialism is a form of direct control over a territory and its people by an external power. It is often accompanied by the establishment of settler colonies in the controlled territory. Colonialism is widely accepted to have formally ended by the middle of the 20th century.

Neocolonialism is a form of indirect control in which a dominating power uses subtler modes of dominance. These subtle modes include financial aid, multinational business corporations,  and soft power to control another territory, its people, its polity, and its policy.

Neocolonialism does not usually involve direct permanent settlement in the dominated territory. It is believed to have begun after the formal end of colonialism in the mid-20th century and is accepted as being prevalent over much of the new world today.

Colonialism refers to a process by which one nation conquers and governs another territory primarily for the purpose of economic exploitation.

The term is used most commonly for the period of European domination starting from the mid-15th century to the mid-20th century. During this period, European powers colonized much of Asia, Africa, the Pacific, and the Americas (even though colonies and colonization existed as early as Roman times.)

Historically, European colonialism was accompanied by and justified by notions of racial, moral, and civilizational superiority of Europe over the rest of the world. 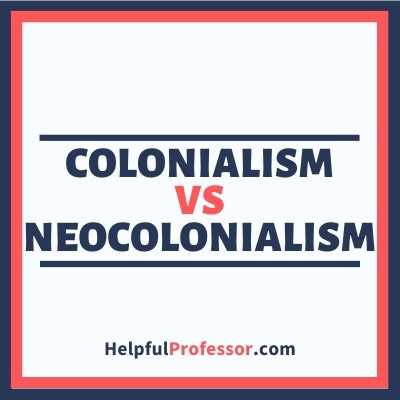 Below are some standard definitions of colonialism:

1. Settler Colonies and the New World

The emergence of the new world countries – America, Canada, Australia, New Zealand, etc, was the direct result of European colonialism.

Beginning with the 15th century, Portuguese and Spanish explorers spurred by a newly-arrived capitalist and mercantilist fervour, began looking for trade routes, accidentally stumbling upon the Americas, Oceania, and several other parts of the world previously unknown to Europeans.

What followed was a large-scale migration from Europe to the Americas and Oceania in which the indigenous populations were either enslaved or exterminated.

The British Empire was one of the largest colonial empires in history that extended, at its peak from America to New Zealand along the east-west axis and from South Africa to Scotland along the north-south axis.

Many parts of the world were colonized solely for the purpose of their being used as large-scale plantations.

Examples include the American south (Texas, Florida, etc.) that were used as large-scale cotton plantations by slave owners, and the sugar plantations of Jamaica.

Such plantations were economically very valuable for the colonizers, owing in part to the availability of cheap labour that was extracted either from the indigenous population, or from slaves imported from abroad.

For instance, during the first half of the 19th century, cotton from the southern plantations accounted for nearly half of all American exports.

These exports of cheap cotton further sustained the textile industries of England and France. Similarly the sugar plantations in Jamaica worked by imported slave labour from Africa and India supplied most of the sugar consumed in Europe.

European colonialism in much of the world was often justified morally by the need for civilizing the savage races by bringing them within the Christian fold.

Jean and John Comaroff (2010) called missionaries the “agent, scribe, and moral alibi” of colonialism, while Edward Andrews (2010) called them the “ideological shock troops for colonialism”.

The English writer & poet Rudyard Kipling famously justified the British colonial enterprise as “the white man’s burden”, the implication being that colonialism was a noble endeavor meant for the benefit of the colonized.

Not to be Confused with Imperialism

The word “imperialism” is derived from “empire”. While imperialism and colonialism are closely related, they are not identical.

This is because while the territories acquired by an empire through conquest/domination may have different political and administrative setups, not all of them qualify to be labelled as colonies.

Imperialism can be better understood as a superset of colonialism, or in other words, an ideology, one of whose consequences is colonialism.

For instance the Ghanian leader and theorist Kwame Nkrumah famously called neocolonialism “the last stage of imperialism”, the implication being that imperialism gives birth first to colonialism, which in turn mutates into neocolonialism. (Nkrumah, 1965).

Horvath (1972) points out that another difference between colonialism and imperialism is the presence of a large number of settlers in the case of colonialism., which may not always be the case in case of a territory merely annexed to or conquered by an empire.

The prefix “neo” is of Greek origin and literally translates to new.

Neocolonialism then refers to newer modes of oppression and exploitation by rich, developed countries, upon poor countries even after the formal end of colonialism by the mid-20th century.

In most cases, the former colonizer continues to exercise a decisive economic, social, and cultural influence on its erstwhile colony to the extent of severely limiting, or in some cases, even ending the latter’s sovereignty.

Neocolonialism results in the same kind of dependence of the colony upon the colonized as resulted from colonialism, with the difference that neocolonialism does not use direct military force, but rather tools of soft power such as financial aid, cultural imperialism, and strategic military alliances to exercise control.

The term neocolonialism was coined by the French philosopher Jean Paul Sartre in 1956 and was brought into popular public discourse by the Ghaninan leader Kwame Nkrumah.

Below are some formal definitions of neocolonialism:

Banana Republic is a term used to describe nation-states whose economy depends on the export of primary produce to a corporation in a developed nation.

Products being exported usually include agricultural products, minerals, or other raw materials that are then shifted to large corporations headquartered in developed nations.

By extension of its dependence on the corporation, which is the primary buyer of its economic produce, a banana republic becomes a dependency of the nation to which the corporation belongs, and thus loses its political autonomy.

This causes it to become politically unstable, as well as highly stratified with a small, wealthy ruling class, and a very large, impoverished working class. The term banana republic was first coined by the short story writer O.Henry to refer to Central American republics such as Honduras whose economy depended almost entirely on the sale of tropical fruits such as bananas to American fruit companies.

The Cold War was the period immediately after the end of the Second World War till the collapse of the Soviet Union. During this period, the US and USSR supported proxy states which engaged in multiple proxy wars – a good example of neocolonial relationships.

The United States and the Soviet Union existed in a state of constant geopolitical tension against each other.

To gain a strategic advantage over the other, each side tried to bring into its sphere of influence as many states as it possibly could, thereby dividing the world into Western and Eastern blocs.

The members of these blocs, often smaller, weaker nations, ended up losing control over their political and economic autonomy, replicating the structural exploitation of colonialism in a postcolonial world.

Financial aid is often provided to allow dominant states to exert influence over non-dominant states. Examples include China’s investments in Africa and the Pacific and IMF funding.

It is the view of several economists and political scientists that post-war institutions such as the IMF and World Bank, set up ostensibly to provide financial aid to developing nations, instead end up usurping their sovereignty by making financial aid conditional upon neo-liberal reforms (see examples of neoliberal reforms here).

Richard Peet, a British political geographer for instance, has argued in his book  Unholy Trinity: The IMF, World Bank, and WTO, that such international organizations, far from acting to eradicate poverty, end up compounding it by imposing unrealistic terms and conditions upon poor countries to which they lend.

Being undemocratic institutions headquartered in the first world (and run by bureaucrats and technocrats from predominantly first world, capitalist countries), these institutions try to impose a form of corporate capitalism upon poor, third-world countries.

Not to be Confused With Postcolonialism.

Postcolonialism is a theoretical framework for studying the effects of colonialism on the colonized as well as colonizer societies. It encompasses fields as diverse as history, literature, economics, anthropology, sociology, to name a few. Neocolonialism on the other hand is a phenomenon or practice.

Colonialism and neocolonialism are two structures of oppression in which a dominating power subjugates another entity for the purpose of economic exploitation, resulting in a loss of sovereignty for the latter.

Colonialism, especially European colonialism from the 15th to the 20th century was often accompanied by the establishment of settler colonies of Eurpoeans. This is a feature that appears to be lacking in neocolonialism.

The latter however, is believed to be more insidious in its effects, as it is not as prominently visible as the former, and hence, harder to resist. As the philosopher Michel Foucault demonstrated, power is often the most effective when it is invisible. (Rabinow, 1991)

Langan, M. (2018) Neo-Colonialism and the poverty of ‘Development’ in Africa. London: Palgrave Macmillan.

This Article was Last Expert Reviewed on December 24, 2022 by Chris Drew, PhD