The world systems theory states that the world exists as a single socio-economic system made up of a core, periphery, and semi-periphery. In this system, “surplus value” is transferred from the periphery to the core.

To better understand the world systems theory, it is helpful to begin with its components. These are three areas of the world:

Below is the classic definition of the world system by Wallerstein (1974): 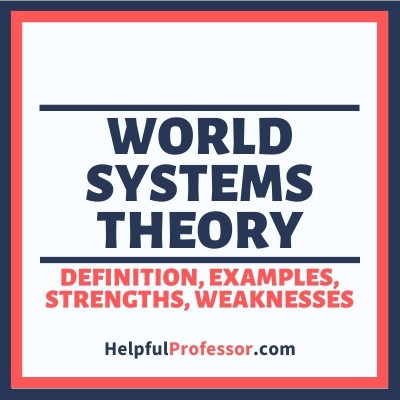 The world systems theory was proposed by the American sociologist Immanuel Wallerstein in the 1970s as an alternative to the then popular modernization hypothesis, which Wallerstein criticized on three grounds:

Wallerstein believed that the modernization theory, and other such models were the product of nineteenth century ways of thinking that believed in compartmentalizing knowledge. Which meant that such an approach could only look at the problems of development and underdevelopment through the lens of either developmental economics or political science.

What Wallersein proposed instead was a unified system approach that did not limit itself to any one subject or approach for analyzing global issues but combined the spheres of society, economy, and politics.

Such an economy stands in contrast to primary economies based on agriculture or resource extraction, and manufacturing economies that are based on skilled or unskilled manual labor.

Jobs in a knowledge economy tend to be weighted towards the finance, technology, and services sector.

The markets for knowledge economy products often tend to be in the peripheral or semi-peripheral countries. For instance, companies such as Facebook and WhatsApp have most of their users in countries such as India, Brazil, Indonesia, Mexico, Bangladesh, etc.

This global knowledge economy is not solely based on classification by nation-states alone, for within the peripheral and semi-peripheral countries there exist regions that are integrated within the global capitalist system.

For instance, cities such as Bangalore and Mumbai in India are recognized as global hubs of Information Technology (IT) and finance, even though they are located within a semi-peripheral country.

Thus, rather than there existing a simple dichotomy of core and periphery countries, the application of the world-systems theory to the knowledge economy reveals a far more complex and interconnected world-system.

2. The Politics of Climate Change and Carbon Emissions

For example, we now know that the USA’s CO2 emissions are greater than that of all of the African continent combined, or that India has one of the lowest per capita levels of CO2 emissions in the world at 1/19th those of Canada.

Hidden hunger is a form of malnutrition in which populations suffer from deficiency of micronutrients and vitamins, even though there may not appear to be any evident starvation.

While the global packaged food giants concentrated in the “core” countries, their products find big markets in the “periphery” countries.

It has been documented that 18 of the 20 most severely affected countries by hidden hunger are in sub-Saharan Africa, while the remaining two are in the South Asian nations of India and Afghanistan (Muthayya et al.,2013).

Since the world systems theory does not take the nation-state as the primary unit of analysis, it helps explain internal inequalities within nation-states better than other development theories such as the modernization theory or the dependency theory.

For instance, India, a country in the semi-periphery of the world system is home to more than 200 million people living in poverty as defined by the World Economic Forum, while at the same time having the third highest number of billionaires in the world (177), after only the US and China.

Application of the world systems theory helps us understand that there are several regions within the peripheral and semi-peripheral countries that are deeply integrated with the global capitalist structure. The regional hubs within nations serve as the core to the peripheries located within the same countries.

This demonstrates a much more complex and nuanced model of global inequalities than simple classifications of first world and third world countries or developed, developing, and underdeveloped countries that other models provide.

Exploitation of a periphery by a core does not happen at the level of nation-states alone; a core within a country can also exploit a periphery within the same country leading to sharp regional inequalities.

The world systems theory conceptualizes the entire world as one unified system rather than made of different systems and structures. In the words of Frank & Gills (1993) it allows us to see ‘a common river and unity of history in a single world system [that is] multicultural in origin and expression’.

The world systems theory can be applied to a number of fields including gender studies, ethnic and racial discrimnaiton studies, political geography, international relations to name a few.

For instance, a gender studies analysis of the world system reveals the manner in which women’s labor is exploited within a capitalist system controlled by men. Nash (1988), in an analysis of the Iranian carpet making industry has shown how carpet making households led by men were located in a periphery relative to the core regions of the developed world to which these carpets were exported. Within the household however, much of the carpet-weaving work was carried out by women while the men controlled the finances, replicating the core-periphery relationship, this time within the household, and with a highly gendered aspect to it.

Because of its wide scope, empirically grounded studies justifying the hypotheses of the world systems theory are still emerging. The theory has been critiqued for presenting too many broad generalizations and not presenting a falsifiable hypothesis.

2. Overemphasizing the Role of Globalization and Capitalism

The world systems theory, in putting forward the notion of a unified world connected by networks of global capital, makes two assumptions that do not always hold true – one of globalization and the other of the inevitability of capitalism.

For instance, Balkilic (2018) has shown how local dynamics in the coffee plantations of the Caribbean developed independently of any global influences. Similarly, several countries such as Bhutan still remain outside the purview of the global capitalist system.

Even though the world systems theory claims to be a unified approach combining the spheres of economy, politics, and society, it ends up relying too heavily on economic causes of underdevelopment while ignoring others such as culture, religion, tradition, etc.

For instance, the Indian caste system does not have any economic basis, being grounded in scriptural and traditional origins. Yet, it is widely acknowledged to be a system that kept millions oppressed and deprived. (Fuller 1973).

In fact one of the reasons Marxist theories failed to find much support in India was their insistence upon class as the primary system of oppression, when in fact, caste played an equally important, if not greater role, in India’s underdevelopment.

Not to be Confused With…

The dependency theory is a theory in economics that is a predecessor and an immediate influence on the world systems theory. The theory took birth in 1949 from the work of the Argentinian economist Raul Prebisch.

It directly critiqued the postulate of the modernization theory which stated that the underdeveloped countries of today are just a primitive version of the developed countries, and provided enough stimulus in the form of investment and technology transfer, can be put on the path to development.

Prebisch challenged this hypothesis by claiming that such investments and infusion of capital into underdeveloped countries only serve to further their dependence on foreign capital.

Prebisch was the first to use the terms core and periphery to describe this relationship – a terminology that Wallerstein later built upon for his own world systems theory. Prebisch was particularly interested in the curious case of Argentina, that, beginning the 20th century as one of the richest countries in the world on account of its strong agrarian exports, failed to keep pace with other rich countries of Europe and North America, eventually sliding into a seemingly interminable cycle of economic stagnation and political crisis.

However the world systems theory differs from the dependency theory in that it rejects Presbisch’s formulation of nation-states as the primary unit of analysis. As Wallterstein explained, core and periphery can exist within the same country too.

Wallerstein also devised a three-tiered model comprising a core, semi-periphery, and a periphery as opposed to Prebisch’s binary division. Finally, Wallterstein intended his formulation to be an interdisciplinary approach to understanding the world, whereas Presbisch’s work was a theory in macroeconomics.

Nash, J. (1988). Cultural parameters of sexism and racism in the international division of labor. Racism, Sexism, and the World-System, Studies in the Political Economy of the World System, 11-38.