Educational technologies often scare teachers who by their own admission are ‘digital natives’.

However, teaching with technology – and particularly computer games – is a huge way we can tap into the intrinsic motivations of our students.

In particular, it can be hard to inspire boys to get engaged in learning when their interests often lie in computer gaming and sports.

One solution is to use sandbox games to promote skills in areas as diverse literacy, mathematics, science and geography.

What is a Sandbox Game?

Sandbox games derived their title from a sandbox a child would play in.

Like a real sandbox, sandbox games allow children to explore and experiment however they like within the game’s microworld.

RPG Maker, a program that allows non-programmers to create their own 3D gameplay environments explains that sandbox games are “more as “play spaces” than games because “goals are often set by the player and not the designer”.

This means there’s rarely a clear linear ‘mission’ set out by the game designers. Instead, players can create their own fun.

My regular readers would know that I believe you should always cite a scholarly source when providing definitions (I am, after all, a college professor).

So, here are two scholarly definitions of sandbox games:

I would argue that sandbox games have the following characteristics:

Sandbox gaming is a fantastic way to bring computer game-based learning into the classroom.

As regular readers would know, I believe we need to start seeing digital play as another form of play-based learning just like outdoor play or unstructured free play in the classroom.

While sandbox gaming may not have the same fitness benefits as outdoor play, it does nonetheless have several cognitive and social benefits, such as: 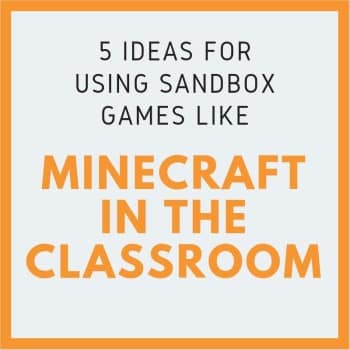