Knowledge gap theory states that wealthier and more educated people acquire information from mass media faster than lower socioeconomic classes. They have greater access to media information and benefit more from it. Therefore, as mass media grows, so too does the gap in knowledge between the higher and lower social classes.

The theory is also known as the knowledge gap hypothesis.

Overview of the Theory

The theory was first proposed in 1970 by three scholars:

The authors explained the theory in their 1970 journal article Mass media flow and differential growth in knowledge:

“as the infusion of mass media information into a social system increases, segments of the population with higher socioeconomic status tend to acquire this information at a faster rate than the lower status segments, so that the gap in knowledge between these segments tends to increase rather than decrease”. (Tichenor, Donohue & Olien, 1970, pp. 159-160)

5 Key Elements of the Knowledge Gap

Tichenor, Donohue and Olien (1970) argue that the gap in knowledge between rich and poor occurs because higher socioeconomic classes have advantages in the following areas:

They therefore are more capable of understanding the information presented to them in mass media. This highlights the importance of reading and studying throughout your life!

“Persons with more formal education would be expected to have the higher reading and com- prehension abilities necessary to acquire public affairs or science knowledge.”

Tichenor, Donohue and Olien define stored information as “existing knowledge resulting from prior exposure to the topic” (1970, p. 162).

According to the theory, people who are more highly educated are likely to have had more exposure to a topic in their past. This prior knowledge helps them understand a topic when they are exposed to it by the media.

The authors explain stored information in this way:

“Persons who are already better informed are more likely to be aware of a topic when it appears in the mass media and are better prepared to understand it.” (Tichenor, Donohue and Olien, 1970, p. 162).

With more social contacts to provide relevant background information on a topic, people with higher socioeconomic status are also more likely to be able to identify false or inaccurate information on mass media.

High socioeconomic status people have “a greater number of reference groups, and more interpersonal contacts, which increase the likelihood of discussing public affairs topics with others” (Tichenor, Donohue and Olien, 1970, p. 162).

Similarly,  This selective exposure argument is seen in new media where we appear to be only consuming media from our ‘tribe’. Some people will only watch Fox News, others will only watch MSNBC.

The differences in our media consumption habits will cause gaps in what we know and believe.

Tichenor, Donohue and Olien (1970, p. 162) argue: “A persistent theme in mass media research is the apparent tendency to interpret and recall information in ways congruent with existing beliefs and values.”

With such a large amount of different media with their own niche target markets, the gap is only going to be growing in the era of new media.

Tichenor, Donohue and Olien (1970, p. 162) argue: “Print media are geared to the interests and tastes of this higher-status segment”

Evidence of the Gap 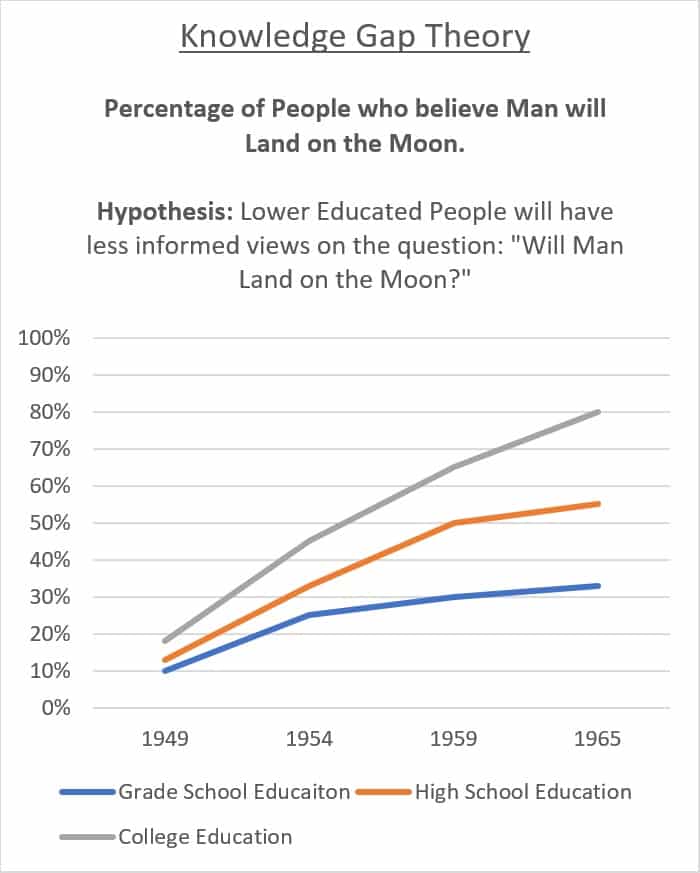 Tichenor, Donohue and Olien (1970) use the theory to propose this hypothesis:

To test this hypothesis, they presented a study of the amount of people in the 1950s and 1960s who believed humans will reach the moon.

Ways to Reduce the Knowledge Gap

In 1975, Donohue, Tichenor, and Olien tried to find ways to minimize the knowledge gap.

They studied the knowledge of people in communities around Minessota between 1969 and 1975.

From their research, they presented 3 hypotheses on how to reduce the gap:

Effects of Web 2.0 New Media on the Theory

The big question about this theory is whether it still works in an era of Web 2.0 technology.

The internet has allowed us to communicate en masse in new ways:

With these new features, different types of hypotheses can emerge:

More research is required on this question!

There are three competing theories that disagree with the arguments of Tichenor and colleagues.

The knowledge gap theory helps us to start thinking about some of the social reasons we have different beliefs. It also gets us thinking about how mass media is accessed differently by different groups.

However, the theory also has several problematic elements, including the fact that it doesn’t account for new media, and is rather deterministic in claiming poor people are uninformed. Many poorer people would take issue with this! (and, likely, challenge the methods used to study them – see, for example: muted group theory).

Nonetheless, the theory is a good introduction to the topic and could stimulate a great deal of discussion about the potential effects of mass media on society. 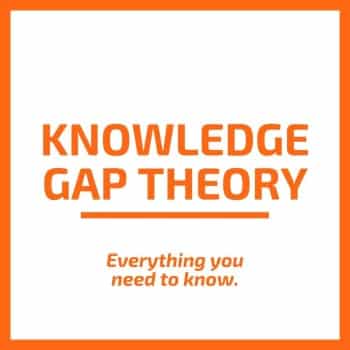 References are in APA style.