This model helps us to define attitudes and deconstruct them to see what’s going on under the surface. Sometimes, affect is influencing behavior more than cognition (when we make impulse purchases, for example). Other times, cognition wins over (such as when we want something but decide not to get it right now because it’s too expensive).

The ABC model of attitude can be used by marketers to find out why someone would want to buy a product (and better package it!) as well as psychologists to help people self-reflect on their own behaviors.

The model emerged from the Yale University Communication and Attitude Program in the 1950s and 60s[1]. However, note that this model has fallen out of favor in recent decades, as discussed in our ‘criticisms’ section later in this article.

Contents show
The Structure of Attitude
Affective
Behavioral
Cognitive
Sequence of Attitudes in the Tripartite Model
Which Wins Out?
Further Examples
Conclusion

The Structure of Attitude

Attitude is structured into the three components: affect, behavior and cognition.

In this model, we consider there to be an “attitude object” that our attitudes and behaviors are directed at.

The affective component of attitude refers to how we feel about something. It’s often our initial reaction, and might be positive or negative, such as a fear-based reaction or an excitement-based reaction.

It’s important to separate affect from cognition, where affect is what we feel and cognition is what we think.

Our affective responses might be driven by deep-seeded memories or experiences that shape our feelings about things. For example, our negative past experiences with certain animals may inform our current feelings toward them.

The behavioral component of attitude refers to our intentions, or what we would do. It can be informed by our attitude or cognition. For example, if we’re afraid of something (our affect), we might run (our behavior). Similarly, if we

However, the behavioral component is generally understood to be malleable. If a marketer does a good job at marketing a product, they can influence the behavior so that it is favorable (i.e. that the person purchases the product).

The behavior is also often influenced by the ‘cognitive’ component, discussed next.

Our cognitive component is what we think about something. It’s what happens when we pause and really think hard about it.

Cognitive and affective components are interrelated, but don’t always overlap.

For example, we might think it’s a bad idea to take a holiday, even though we have positive feelings about it, because it’s too expensive. That’s because we’re overriding our impulsive feelings in order to make decisions based on logic.

Sequence of Attitudes in the Tripartite Model

Affect, behavior or cognition could each win out in a decision. This changes depending on the situation. So, different ones come first, second and third at different times.

Here are some examples:

We’ll often try to reflect on which of the three components in the ABC model will “win” and force a behavior. For example:

Here, the conflict between cognitive and affective components of attitude may be resolved by the third – past experience – which might be enough to cause a consumer to make a purchase.

Here are some more examples:

The ABC model has largely fallen out of favor in social psychology since the 1990s because it is widely understood that behavior should not be subsumed under attitude. They should, perhaps, instead be considered as separate things. As Sutton & Douglas (2020, p. 151) argue[2]:

“We want to study how people’s behavior is related to how they think and feel about attitude objects. We do not want to simply define their behavior as an inherent part of their attitude.”

Nonetheless, this model is useful for students to start thinking about how attitudes are formed and how we can influence behaviors by looking deeper at people’s cognitive and affective reactions to attitude objects. 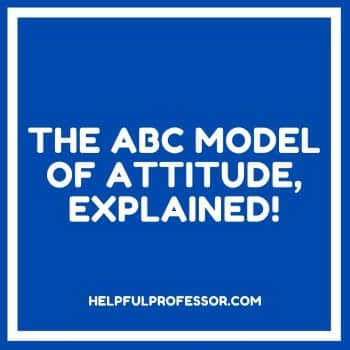